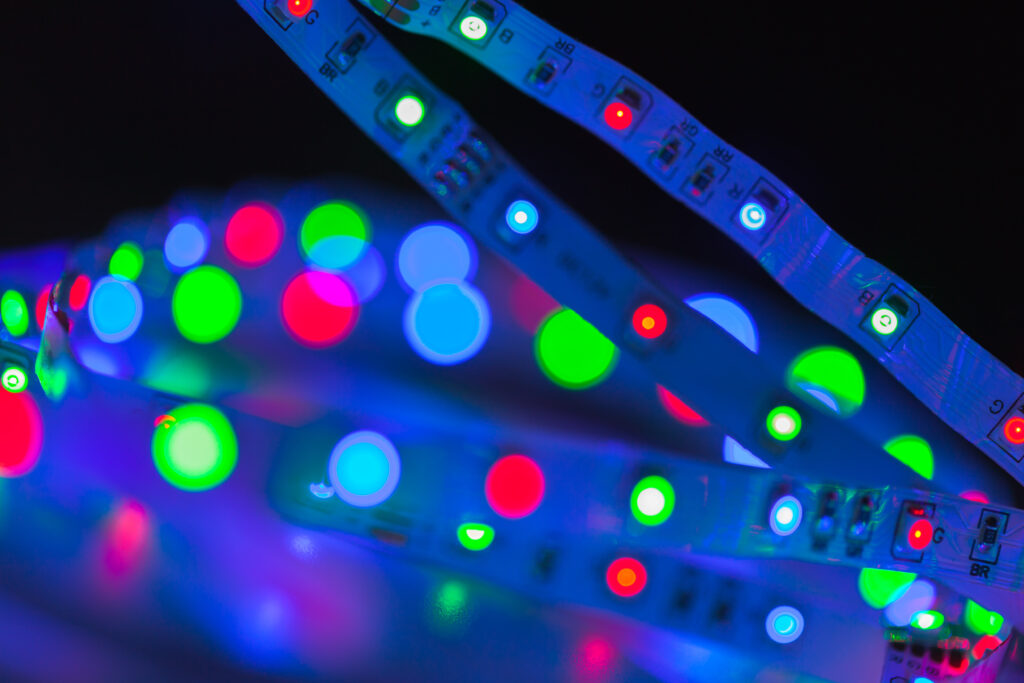 RGB LED strip has been popular and has opened the door to previously unheard-of lighting possibilities, allowing not only a wide range of customizable colors but also the ability to cut and join any length to create totally unique shapes. RGB lighting is trending upwards in a variety of applications from under-cabinet accent lighting to PC gaming lights.

RGB stands for Red, Green, and Blue. An RGB LED is a combination of 3 LEDs in one package:

To have an idea of how to combine the colors, take a look at the following chart. This is the simplest color mixing chart, but gives you an idea of how it works and how to produce different colors.

Each RGB LED has 4 leads. One for each color and one common anode (+) or common cathode (-) lead. The anode lead is the longest one.

How Does RGB Color Mixing Apply to LED Strip Lighting?

Each LED color can produce 256 shades of the same color. If three primary LEDs are combined together, it gives you over 16.7 million color combinations.

What Are LED RGB Light Strips?

An RGB LED strip works on this same principle. RGB LED strip contains a series of RGB LEDs joined together on a PCB board, usually with 4 wire traces, 3 for each color and 1 for a common anode. Standard RGB LED strip uses a primary 3-in-1 LED chip made up of red, green and blue colors. It can produce a wide range of colors by mixing the three and looks almost white with all three at full brightness.

RGB LED Strips can also create a very cool white by turning all 3 LEDs at the highest power, however this white has a noticeable blueish hue over 6500K. RGB LED light strips do create many colors, but they still have some limitations. For example, they cannot produce brown or soft pink. The accuracy of colors all depends on the controller unit you choose.

RGB LED light strips can be controlled by different kinds of controllers. There are a wide variety of LED controllers available in the market from single-zone RF controllers to DMX controllers that can handle up to 500 zones at the same time.

The type of controller you need depends on a number of factors that we will discuss afterward. Now let’s take a look at the major type of RGB LED controllers available on the market.

There are multiple RGB LED light strip controllers in the market. Here are some options:

The single-zone RF controllers allow you to control all of the RGB LED strips connected. However, you can only control all the LED lights together. You can’t change the colors or manage the brightness of different sections independently.

Multizone RF controllers give you the option of managing multiple LED strip zones or channels separately. This allows you to control the mood lighting in your living room and under-cabinet lighting in your kitchen with one controller independently.

You can also add multiple LED strip receivers to a single channel on your remote. This enables you to dim the lights in your home office and the gallery with a single controller, or if you want to set different light levels in larger areas like hotel lobbies and restaurants.

A DMX controller gives you unlimited choices to control the lighting in your zone. DMX controllers used to be big and bulky that were only used in theatre lighting. However, with the improvement in technology, today’s DMX controllers can be smart touch-screen panels, wall controllers or even apps on your phone and computer.

DALI controllers use the Digital Addressable Lighting Interface (DALI) dimming protocol to help you manage your RGB LED light strips. These controllers are recommended for larger spaces like office buildings or hotels. You can pre-program lights to change color, brightness, or switch on / off.

How to Choose the Best RGB LED Light Strip Controller?

1. The Purpose of Application

Before choosing an RGB LED strip controller, you need to figure out the space size you want to cover and the purpose of the application. If your project is small, like a bedroom or a home office, you should go for an RF RGB LED controller. Installation and control are easy and you can use it right away by referring to a manual.

If you’re looking to install RGB LED light strips in a hotel, restaurant, office building or a big room, then choose DMX or DALI controllers. They will help you control the brightness and color of LED light strips separately over a larger area easily.

2. Size and Type of Controller

RGB LED light strip controllers come in all shapes and sizes. The most common types are SMD5050, SMD3528, SMD2835, SMD5630, SMD3014, SMD3838 RGB LED strip lights. The best one for you depends on the size and type of controller you prefer. A sleek, digital multi-channel RF controller is great for home and office use, while a big, sturdy DALI controller is perfect for hotels and restaurants.

RF controllers don’t require any setting up and can be used right away. Both analog and digital RF controllers have a simple interface. Inline controllers require some setting up but are fairly easy to use. DMX controllers can be simple or complicated depending on the system you choose. DALI controllers are the most advanced and have a slight learning curve. Choose the right controller that you feel convenient.

Shine 5-in-1 5050 RGBCCT Light Strip is a great choice for all your lighting needs from under cabinet lighting, kitchen counter lighting, cove lighting, accent lighting, to even office lighting. The light strip will not only be great for your home or business, but it can also fit perfectly in a hotel or retail store.

This built-in 4-in-1 RGBW strip is perfect for powering up your home or business. This RGBW strip features a premium 4-in-1 chip LED that has the ability to produce the best color possible. The RGBW LED produces a true color and will have a pure white. The pure white color and true color will be produced due to the 5-channel controller that is built into the RGBW strip.

The DC12V / 24V SMD5050 RGB LED strip will be able to give you the perfect LED lighting for your home or business. It has a total of 5050 RGB LED lights, and they will cover a range of 30 feet. The light strip can be cut to the length that you need.

SMD3838 RGB LED tape light, with package size 3.8mm*3.8mm. Its high density and RGB color toning LED strip lights are designed for your essential display and ambient lighting installation requirements. Shine range of LED strip lights is here to give you the most value for money and provide a cost-effective high standard LED lighting solution.

Hi, I am Leo Fu, the founder of Shine Lighting. I've been running a factory in China that makes linear strip lights for 10 years now, and the purpose of this article is to share with you the knowledge related to LED strip lights from a Chinese supplier's perspective.